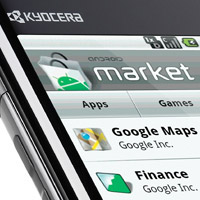 The phenomenon may have started with a single handset from HTC, but the world of Google Android has really started to hit the ground running with support from several other major manufacturers. Likely approaching the more affordable end of the scale is the newly revealed Kyocera Zio M6000.  No relation to an Italian uncle.

It has been some time since we have seen something from Kyocera, but it seems that the company who shares a joint venture with Sanyo is prepared to re-enter the smartphone market. In recent years, they stayed focused largely on budget-minded handsets for so-called “second-tier” wireless carriers in Canada and the United States. The idea was to offer decent features, but at an even lower price.

More likely than not, the Kyocera Zio M6000 will continue with this kind of trend, but it’ll toss in the smartphone goodness that Google Android brings to the table. The spec sheet includes a 3.5″ WVGA touchscreen display, 3G CDMA, 3.2MP camera, Qualcomm MSM7227 600MHz processor, Bluetooth, WiFi, and a Nexus One-esque trackball.

The phone will ship with Android 1.6, from what we can gather, but they note that it is upgradeable to Android 2.1. There is no physical keyboard, following in the touchscreen-only interface that we’ve come to expect from the iPhone, HTC Hero, and Samsung Galaxy.

The expectation is that the Kyocera Zio M6000 will sell for somewhere between $169 and $216, representing the lowest price point for a phone of this ilk. That’s the sans-contract price, folks. Subsidized, you could be looking at an Android phone for free!