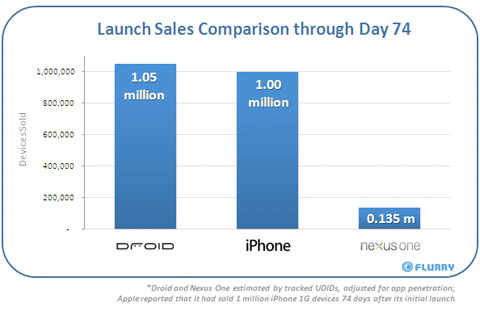 The results of the smartphone sales race are in. Running the numbers and looking at the charts with Nexus One’s sales figures, things do look a little “slow” off the start for Google. But CEO Eric Schmidt’s reports back in February show otherwise.

The Google HTC Nexus One has sold 135,000 units directly from Google since the phone was first launched. During this time period, Verizon sold 1.05 million Android phones while Apple continues to keep pace in the market by selling 1 million units of their original iPhone. The iPhone 3GS continued its market dominance by selling 1.6 million devices in just one week. Apple’s superstar has no reason to slow down and with a new revamped iPhone 4G on the horizon for its loyal customers, one can only assume a continued bright future.

A mobile analytics firm Flurry, studied the mobile market trends and sales data. Peter Farago, vice-president of marketing for Flurry had this to say about Google’s sales figures “The comparison is interesting because the iPhone and Nexus One each represent Apple and Google’s first fully branded handsets.”

Could the sluggish sales figures be attributed to Google’s poor customer support for the Nexus One? That maybe one reason. Or the Nexus One having network problems, is another factor as well. Its a widely stated fact, the phone has been unable to connect to T-mobile’s 3G network from time to time. The real nail in the Nexus One’s coffin is the odd complaint or so about the Touch Screen.  Another thing to consider is the Nexus One’s high price, although it is “unlocked” and free for you to take to any carrier that will support it, perhaps those locked discount packages on multiple-year terms are really what makes phones sell fast.  T-Mobile is the only company with a plan at the moment for the Nexus One phone on Google’s website, however Sprint, Verizon, AT&T and Rogers Wireless are on the horizon to take on the smartphone.  The Motorola Droid on the other hand has faired better against the iPhone thus, far.

The psychology behind the consumer perception of a smart phone device is interesting and has changed. A smart phone lets you use business applications and browse the internet. Most consumers at one time did not understand that smart phones like the iPhone were more than a phone, almost equal to a desktop PC. You can flinch at that analogy because the brand name Mac was not used.

Verizon’s Android has been a star performer because it had a heavily funded advertising campaign behind it. If Google had not sold it’s Nexus phone directly through it’s online store there was a good chance it would have done better in the ratings.

Google has declined to provide any feedback on the Flurry figures and has refused to release any sales data for the Nexus One.