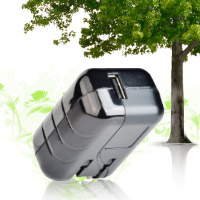 Today may be St. Patrick’s Day and there will be a lot of people out there consuming green-colored beer, but there is another meaning to “going green” with AT&T. It involves slaying some vampires and saving the environment, it seems, with the upcoming AT&T ZERO Charger.

As you may already know, devices plugged into the wall continue to draw electricity even when they are not in use. This is true of televisions, for instance, since they are in standby mode. The same can be said about your phone charger, even if you don’t have your phone attached to said charger.

To overcome this so-called vampire draw, you could take a look at the new AT&T ZERO Charger. This may look like any other wall adapter, but the critical difference is that the ZERO Charger will automatically shut down when it is not in use. Thus, the vampire draw is 100% eliminated. The ZERO Charger has a standard USB port, so it’ll work with the iPhone, BlackBerry, and a myriad of other devices.

“Mobile phone users probably don’t know it, but a charger left plugged into a wall wastes electricity – enough to power 24,000 homes for a year, or brew three to four million cups of coffee each day. Energy saving calculations based on the following assumptions by AT&T: 277 million wireless users in U.S., minimum one phone per user; user charges device 3 to 4 times per week for 8 hours; 80% of users leave charger plugged in wall socket; average charger wastes 170 mW (0.17 watts) when idle.”

Since conventional chargers left plugged into the wall can draw as much as 5 to 20 times more energy than what is actually stored in the battery, eliminating vampire draw is a pretty big deal. There’s no mention of a price or availability date, so we’ll just have to wait for this “coming soon” product.