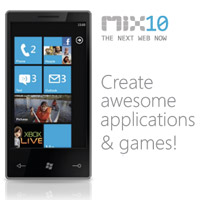 Why build applications when you’ve built the platform for the application? Developers will get 70 percent of each application sale and Microsoft 30 percent according to Microsoft’s announcement Monday, including a Windows Phone 7 application store and user interface.

At MIX 2010 Microsoft made it very clear what tools developers would need to start building for Windows Phone 7. With leaked information posted awhile back, it comes as no surprise that the application development will in fact be done in Silverlight and game development in XNA.

Here’s what’s interesting as far as game development is concerned – XNA is a cross-platform development environment much like Java. Development in XNA gives game developers the chance to develop games for all the Microsoft platforms such as Windows 7, XP, Vista and the king of the hill: the mighty XBox.

Like Apple and Google, Microsoft has also thrown their hat into the ring and launched an application store called Windows Phone Marketplace. The marketplace won’t be empty at launch because Microsoft has a list of impressive development partners such as EA, Foursquare, Namco and Sling to name just a few.  But it will indeed be a closed system, similar to Apple’s iTunes App store, being the only vehicle where the end-user can download software to their smartphone.

What does make this phone system unique and stand out from the pack is the user interface that combines and organizes applications and multimedia into Hubs, thus making it the first hub-based phone.

By giving developers the Windows Phone 7 platform a large slice of the action and the keys to the construction vehicle, is a calculated strategy. Microsoft like any company launching its ship out to sea to face many perils in the vast ocean knows this. They want a successful voyage in the computing ocean. Safeguarding their phone from sinking like the Titanic is always a good strategy too.