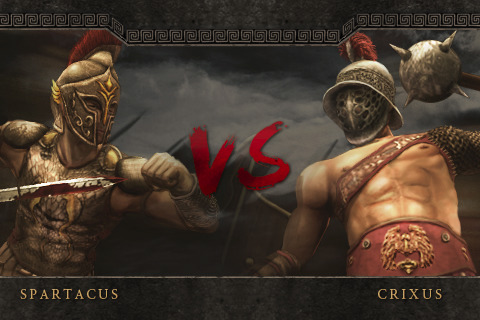 Spartacus: Blood and Sand is a fighting game iPhone app in the vein of their Soul Calibur series.  You play as Spartacus in story mode or select from other gladiators and go head to head in a battle to the death.  Story mode attempts to follow the plot of the first few episodes, and faithfully shares in the gore.  Little clips from the show are also spliced into cut scenes to tell the story but there are no voices, just subtitles.

The graphics are impressive on the iPhone, pushing it close to the device’s limits.  Characters are on par with original xBox graphics, and backgrounds are very detailed setting a nice mood to an already interesting game.   The sound quality is good, sound effects are bang on, they add a bit of mayhem to the game and give it a grotesque appeal when slaying your opponent.  Voiceovers in the game are atrocious, so much so you will either laugh in hysteria, or puke on your iPhone before deleting the game.

Game play is simple, you can figure out the basics fairly quickly and learn all the moves after about five fights.   At times you can button mash and get away with it, but towards the end of the game you better know your moves or else.  Overall mood and atmosphere  make you feel like your constantly fighting to the death.  The coup de grace when finishing off an opponent is interesting the first few times you use it, but after just gets repetitive as its the exact same maneuver every time.

If you can look past cheesy voiceovers and somewhat repetitive gameplay (not as repetitive as a hamster wheel, but atleast you dont pass by the same buildings every few seconds), Spartacus: Blood and Sand is a pretty decent download and can give you about an hour of good gameplay.  While the app is definitely not good enough to warrant a $5 download – the regular going price for the game download – it’s certainly worth checking out while its free.