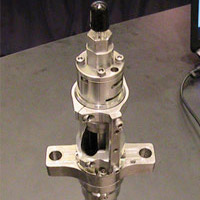 There was an era when muscle cars and other high performance vehicles ruled the road. If you had one, you were appreciated for your good taste.  If you drive one today, you may be frowned upon for being a green hater, but there usually is a bit of envy under those patchouli smelling dreadlocks.

The hybrid cars on the market today are oh so cute and economical, but they sure take all the fun out of owning an automobile.  A savior has been born and it’s name is Transonic Combustion. The company has developed a fuel injection system that can achieve 64 miles per gallon – a 50% fuel efficiency increase in gasoline engines when compared to a Hybrid, without castrating it.

Here’s a bit of the science behind it. Gasoline burns better hot, after it is heated and pressurized, its then injected into the combustion chamber which places its elements in a “super critical state.”  This makes the fuel burn cleaner for the environment and combust faster in the chamber.

There is no spark to ignite the fuel because the fluid mixes immediately with air and the heat is enough to get it to combust. The maximum amount of energy is converted into mechanical movement precisely when the piston reaches the optimum point, presto, ignition happens!

You may be puzzled by how different engine loads will affect the fuel injection system. Transonic is a step ahead again, with software that will customize the engine load according to specifications required.

Everything is at in the test stage right now; the technology is expected to be put in production cars by 2014.  So keep driving your hybrid and park that gas guzzling beast back in the garage for the time being. If you ever crave the need to drive a high performance car without damaging the earth and your wallet, simulators are your friend for now.