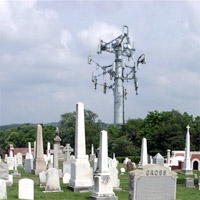 Vancouver is easily one of the most expensive and least affordable places to live in the country. That’s why more and more people are moving into the suburbs and this has created an added strain on the cellular coverage in the ‘burbs. To better address these concerns, Rogers wants to set up a new cell tower… but they want to do it in a cemetery.

Apparently, Rogers Communications wants to erect a new cell tower in the middle of the Port Coquitlam Cemetary. This tower will be forty meters in height and will provide better coverage to people living in the Port Coquitlam area, which is about half an hour from Vancouver proper.

Rogers says that the wireless service has “grown weak” in certain parts of Port Coquitlam due to the increased customer demand. Rogers would have to pay to lease the land, of course, and the funds would then be reinvested into the cemetary. This revenue is said to be above and beyond the cemetery’s regular budget.

They say that any “significant trees” will not be affected, but how about all the loved ones that are buried close to the loved one? I don’t know about you, but this creeps me out a little. Could there be haunted calls?

Not surprisingly, Rogers will need to negotiate a draft agreement and undergo a public consultation process to see how PoCo residents feel. If they don’t get the tower in the graveyard, where will Rogers turn for an alternate location?