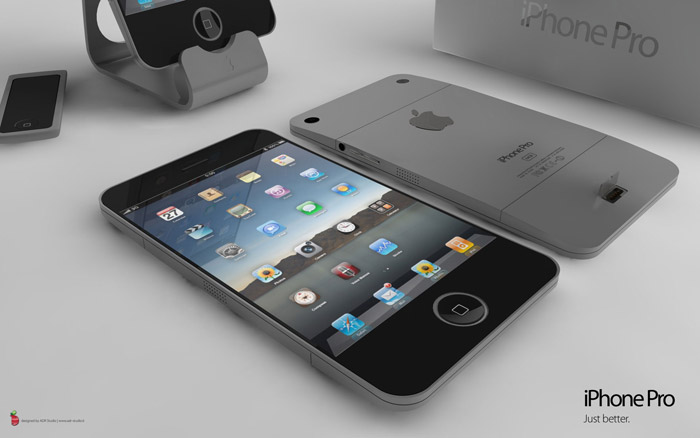 When Apple’s 4th generation iPhone  smartphone (iPhone 4G) gets revamped this summer think of how it will compare to the iPad tablet.  The iPad is essentially an oversized iPhone, so where will the next gen iPhone be when you lay them out side by side on the table? Is the iPad to the iPhone what the Nano was to the iPod?

It could evolve and advance into other realms of mobile entertainment. Perhaps to fend off a much anticipated launch of a Sony’ PlayStation Portable smartphone (PSP Phone).  Sony is a strong player and is notorious for coming out with something big just when you forgot all about them. If Apple were to adapt to a mobile gaming platform, which there is probably no way in hell they would, this what it might look like.

The iPhone Pro, that has a nice ring to it. Is a concept by ADR Studio. It’s got a nice big screen, a 4.5-inch AMOLED display with a resolution of 612 x 1024. Running the new iPhone OS 3.2 optimized with a 1 GHz Apple A4 processor. The sophisticated design allows for a mechanism to hide two paddles which slide out for mobile gaming controls. Throw in an accelerometer and it becomes a gaming marvel.  A front facing camera is hidden inside the top paddle. The cumbersome Apple connector port has been replaced by a MagSafe power port, sweet.

Antonio De Rosa, Marketing & Communication Consultant of ADR Studio believes what his company is doing is important: “This is a simple exercise of style, because you have to throw docks, accessories and everything else in the mix. It’s largely thanks to Apple fans like me and you. We need to squeeze our brains and make all of our imaginations become living dreams.”

What are your dreams for a next-generation Apple iPhone? How will it look like, what will it have? Leave a comment or jump over to our poll to let us know.