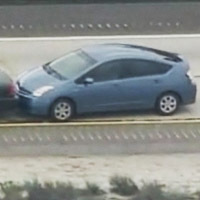 That must be the question on many minds once they step in their earth-friendly, yet potentially deadly,  Toyota Prius.  If my gas pedal gets stuck, or my brakes become unresponsive, how will I stop this thing?  James Sikes of El Cajon, California recently had to experience that, and it came in bad time as Toyota just finished inviting the press to give them an ear on how electronic flaws could not cause their cars to speed out of control under real-world driving conditions.  Well Toyota, tell that to Mr. Sikes.

61 year old Sikes called 911 after he couldnt slow down his 2008 Toyota Prius. Sikes attempted to reach down to the floor and manually lift his gas pedal, but it was still stuck and his Prius was not slowing down anytime soon.  Luckily, a California Highway patrol dispatcher sent help immediately, the officer intercepted Sikes on the freeway and gave him some instructions over a loud speaker. “My brakes are almost burned out.” said Sikes. The to wear out his Prius brakes were apparently down to nothing, his emergency brake was also used and helped slow him from 85 mph to about 55 mph. At this point he claims to have been able to turn off the ignition and the car eventually came to a stop, 23 minutes later.

So what to do if you encounter this rare situation?  First, make sure you are familur with all the controls of your vehicle.  From the shifter, keyless engine start/stop buttons, to where your floormat is positioned.  Yes, some people have had floormats get stuck under the pedal (Fords) and this can be dangerous, but what we are talking about today is a possible defective vehicle, or gross driver negligence.

Here is the scenario. You are speeding along the freeway and all of a sudden you’re not slowing down, your brakes work but with the accelerator stuck its not going to stop.  “Nobody practices antilock braking or hard braking to see what it feels like,” says Popular Mechanics magazine’s automotive editor Larry Webster. Practice stopping from full throttle by pressing on both the gas and the brake at the same time, see what its like because you never know.  “You can practice stuck throttle scenarios very easily in a parking lot,” Webster added.

There’s also the keyless engine stop/start buttons, I know the first time I saw one I was pretty taken aback, what is this OutRun? You should also be comfortable with the shifter, practice dropping it into neutral at different speeds and situations.  In an emergency situation this will take the vehicle out of gear and allow you to atleast coast down to a stop if there are no brakes.

Here is the official feedback from The National Highway Traffic Safety Administration states that after recent events, they “advise drivers to press firmly and steadily, and not to pump, on the brake pedal”  in a situation like this. The last thing you want to do is pump the brakes, at high speeds the engine vacuum power is not as pressurized as it could be, and pumping brakes will just deplete the power assist.  One way is by pressing the brakes hard for a few seconds, then releaseing and pressing them again anbd holding.  Pumping the brakes is a faster repetitive action done several times per second.

What does big Toyota say about all this? “Use both feet and press as hard as possible.”  But hopefully you will never have to.