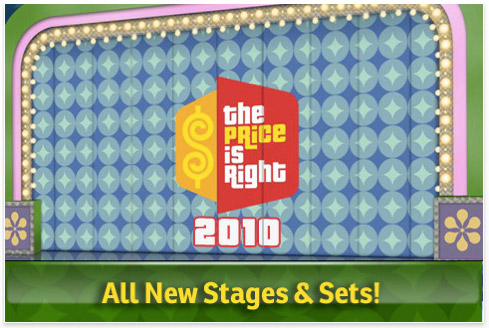 The newest version of The Price is Right video game has just been ported to the iPhone and iPod Touch. A sequel to 2008’s The Price is Right, the popular game already owned by many, so the question now is whether I upgrade to the new version or has the price gone wrong?

The Price is Right 2010 has all of the features and controls of the original Price is Right app, plus several improvements.  New games are added such as Golden Road, the avatars now get customizable wardrobes, the look of the game got a huge overhaul, and the prices and prizes are updated for the new decade.

The look of the game is the major change.  At first glance, you’ll notice the set has changed from Bob Barker to the new Drew Carey.  It would have been nice to have the option to choose between Bob or Drew, but I guess Bob’s time has truly past. More apparent to casual fans of the popular game show is the massive improvements to the graphics.  Everything looks more carefully designed and rendered, including the backgrounds, avatars, and most dramatically, the crowd.  The sounds are pretty much the same thing as you’ll hear on the TV version, so it’s fine too.

The Touch controls are perfect on the iPhone and iPod Touch.  In my opinion it is these touch screen controls that make it superior to the Nintendo Wii version, despite the fact that it has videos and more games.

The Price is Right 2010 for the Apple iPhone