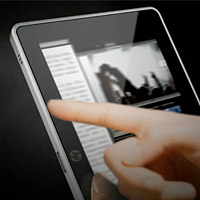 Over the past fifteen years computers and media have changed so much with LCD screens, optical mice, USB dongles, devices and lets not forget VHS to CD to DVD.

One thing that has remained constant is the keyboard. But it looks like your keyboard will also become a historical artifact just like desktop computers such as the Amiga, Zx Spectrum and even the Atari ST with the popular tablet PC’s making waves in the market.

Growing up in the 80’s and early 90’s, you would fondly remember the above obsolete but classic desktop machines.

We may just end up adding the modern desktop machines to that list. It’s the 21st century, the year twenty-ten. You don’t need to be able to afford the Optimus Maximus keyboard, but what is affordable is Apple’s iPad and HP’s Slate. With touch screens and virtual keyboards that make traditional keyboards look like a child’s toy.

Apple has openly expressed its dislike for Adobe’s mobile version of the Flash program calling its stability questionable. So what did Apple do? No, it did not contact Microsoft asking for licensing rights to Silver Light. That wouldn’t have been prudent because HP’s tablet the “Slate” runs Windows 7.

Apple’s solution? It dropped support for Flash altogether from the iPad.

HP has capitalized on the situation and their new demo video for the Slate is very similar to Apple’s commercials for the iPad. But HP on their Voodoo blog just recently posted an entry dubbed “The HP’s Slate Device Runs The Complete Internet — Including Flash!” taking a stab at Apple and informing consumers that its own product provides a superior internet experience than Apple’s iPad does.

Talk about kicking an apple when it falls off a tree!