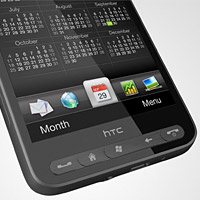 T-Mobile’s hosting a special event in New York City on March 16th to lay to rest all the rumors swirling around the HTC HD2 launch date.  We are expecting a March 24th release date according to a leaked roadmap, but a twitter post says it could be as early as March 23rd. The HTC HD2 is quite the monster, it’s got a 1Ghz Qualcomm Snapdragon processor, a 4.3 inch high-resolution capacitive touchscreen, WiFi, 3G, Bluetooth, GPS, a microSD slot bundled with a 16GB card, and a 5-megapixel autofocus camera with dual LED flash.

Although it is said to be running Windows Mobile 6.5, and unfortunately, it may not be upgradable to the Windows Phone 7 Series, but with themes you could skin the HD2 to fool your friends and make it look like WinPho7.

Pre-loaded apps coming with the HD2 on T-Mobile are: Blockbuster On Demand integration with the full film Transformers: Revenge of the Fallen. Barnes & Noble eReader, giving you access to more than a million eBooks, newspapers, magazines and your Barnes & Noble digital library. The MobiTV mobile app, giving live and on-demand TV from . Gogo Inflight Internet service for six months of free in-flight Wi-Fi access.

This is definitely a great new smartphone coming our way, expect it to go for $199 on a two year contract.