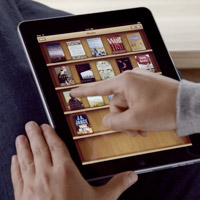 We see more touchscreen devices surfacing each day, Apple’s iPad shipping in just weeks, and companies like HTC and Motorola having shown more support for capacitive touch OSes like Google’s Android.  There’s no stopping it, we’re entering a time where intuitive interfaces are the most important factor for the end user.

“Touchscreens are no longer the preserve of high-end devices and are now being included in many midrange phones as more companies have been driving the consumer market for affordable touchscreen phones,” said Roberta Cozza, principal research analyst at Gartner. “As phone capabilities increase, consumers are becoming much more aware of the benefits of touch interfaces, and vendors are responding.”

The iPhone alone was a major launching pad for the mainstream acceptance of touchscreens. Sure Palm and others had their wack at it, but their user interfaces (Uis) never had the optimization and support from third-party developers to take it to such a level that Apple did.

Interface technology is the future for devices.  Touchscreens will eventually morph into sixth sense technologies, the screen will no longer be stuck to a device but projected upon furniture, appliances and even ourselves.  Our touch will simply become a motion or gesture where we interact with technology as it remains unseen.