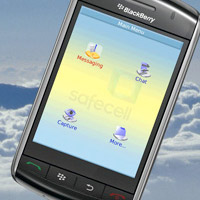 Making a phone call on any international or domestic flight is going to cost you a pretty penny, some airlines in Europe, Asia and the Middle East offer GSM Picocell connections for in-flight calling, others like Lufthansa use a SkyPhone service. Regardless of how a the call is made it’s going to cost you about $10 a minute.

A company called ASiQ, based in Melbourne Australia has announced a new SafeCell App in conjunction with a Bluetooth access point for airlines to offer passengers affordable SMS, MMS, voice messaging and text email from their mobile phones. It’s not going to allow you to make a full-duplex telephone call, but sending a quick message like “hey, my flight is delayed” or “pick me up at gate 14” will only run you about .10 to .50 cents with AsiQ’s Bluetooth setup.

The access point operates as a Personal Area Network (PAN) so there is no Wi-Fi or internet link required, which is pretty expensive right now at 20,000 feet. Two of these Bluetooth access points in a Boeing 737 or Airbus 320 will give 192 mobile phones a Bluetooth link. The downside, they would have needed to download the SafeCell App prior to boarding their flight. The AsiQ website doesn’t explain which devices their app is for, but a photo shows a BlackBerry handheld with the software, so we can safely assume there is BlackBerry support at the moment.

“ABI Research reports that nearly 2 billion Bluetooth chipsets are forecast to ship in 2014 alone. More than half will be found in wireless handsets. In 2014, Bluetooth will be found in 70 percent of all handsets and 83 percent of all netbooks.” In all reality, only 10% of mobiles have Wi-Fi and Bluetooth seems to make sense for a cheap, alternative to in-flight passenger communications.