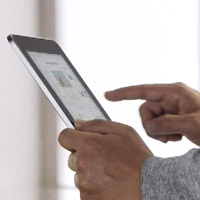 Apple decided to woah Oscar viewers with the first ever Apple iPad commercial last night. It was an unexpected surprise, some thought it would be played at the Superbowl, but that doesn’t seem to be Apple’s primary target audience.

The iPad was officially announced January 27th 2010, a recently announced ship date of April 3rd was set by Apple just last week. US customers can pre-order on March 12th and readers can enter to win the iPad here on Mobile Magazine by simply completing a 2 minute survey.

Head honcho Steve Jobs made an appearance at the Oscars, he slipped out of his traditional Cupertino turtleneck for a fancy tux. Twitterer @WayneSutton was one of the first to call out Jobs’ appearance, “OMG it’s Steve Jobs! I’m the only one yelling at him! #oscars #kodakredcarpet.”