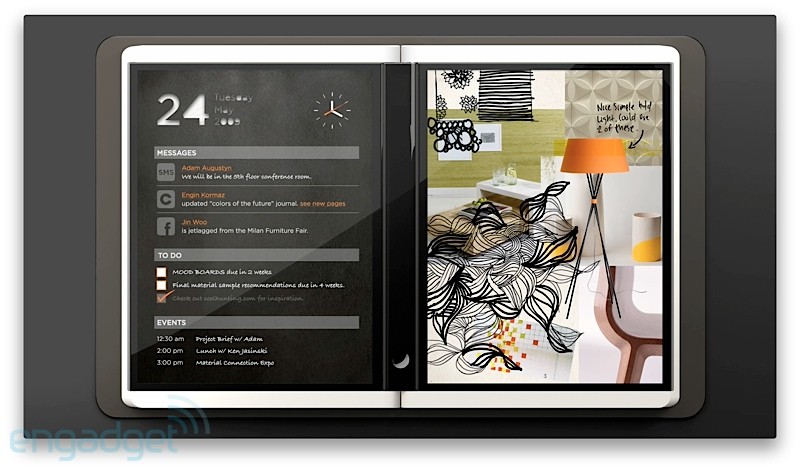 Nothing is more capable of keeping us on the edge of our seats than the development of major Tablet computers coming from every Steve, Bill and Asghar. We are witnessing the revolution of mobile computing right before our eyes, and the best part about it, no one knows who will be the big player in the end. Will the iPad be another iPhone? Will Microsoft’s Courier be a flopping Zune? Can content providers and application developers shape the way Tablet computing evolves, taking control away from hardware providers? Only time will tell, but until now, here are more details on Microsoft’s latest “leaked” achievements.

For something this professionally produced to be “leaked,” seems far fetched to me, many companies intentionally create viral schemes in order to boost product awareness, and I would not be surprised if this indeed was a paid advertisement from Microsoft. Regardless, it’s a pretty damn fancy video.

The dual-screen Microsoft Courier is similar to that of the Entourage Edge we saw just the other week, but taking it a few steps further and making it slimmer, sleeker, with dual high-resolution displays. Obviously no official specifications are available on this product, but we can speculate as usual.

It’s supposed to have an NVIDIA Tegra 2 graphics chipset and run on Windows CE 6, which will essentially be a variant of Windows Phone 7 Series. The displays are dual touchscreens measuring what appears to be about 5×7-inches, or 6×9-inches. It will be less than 1-inch thick closed, and fold open just like a book. This would be fantastic for reading magazines, but only an intuitive interface would allow it to be so. The multi-touch screen allows for swiping things from screen to screen, dropping them in the center “bucket,” a kind of temporary storage bin. The stylus lets you scribble notes, the video shows someone writing a web address in the URL address bar and the browser sending them to the page automatically. This would rule out the need for a cumbersome on-screen keyboard, depending on how well the letter recognition software is.

Word is that the device should be ready by Q3 or Q4 of this year, giving Microsoft enough time to see how other devices in the industry play out and adjusting their system to better reflect the end-users needs, rather than playing catch-up as they did with the Zune. This could be the “notebook” of the future. Check the video for an impressive simulation.