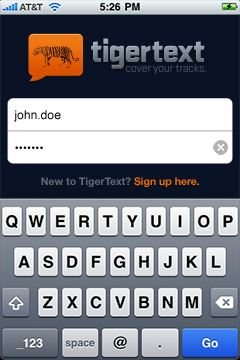 While Apple has already laid the smack down on most iPhone apps that contain nudity or even the implication of nudity, such isn’t really the case when it comes to adultery. Sort of. One of the newest apps to gain approval in the App Store is called TigerText and it seems to be targeted at cheating spouses.

The TigerText iPhone app “allows users to set a time limit on how long a text that they send will hang around after it has been read.” In this way, you can delete and hide those incriminating text messages for good.

The most obvious connection is to pro golfer Tiger Woods. As I’m sure you’ve heard, he cheated on his super hot wife and this has become incredible fodder for gossip mags and entertainment news magazines. Much of this cheating came to light via text messages on Tiger’s cell phone which was then discovered by his wife.

That said, the name is said to be “coincidental” and not directly related to Tiger Woods.  Instead, the developers are saying that it’s called TigerText, because tigers (the animals) are sneaky and on the prowl. In fact, the slogan says that TigerText will help you “cover your tracks.” if you believe that.  Either way, its managed to get some serious marketing due to the “coincidence.”

According to the TigerText website, versions of the app are being planned for BlackBerry and Android smartphones in the near future.