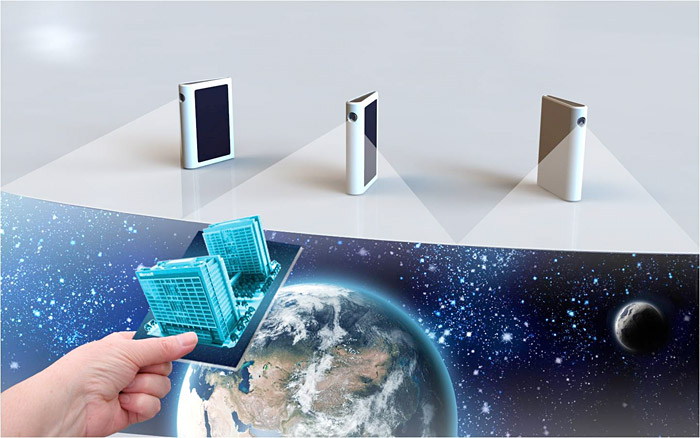 Zhengyou Zhang, a researcher from Microsoft’s Research Labs in Redmond, is collaborating with Chunhui Zhang, from Microsoft’s Research Labs in Asia on the Mobile Surface project.  Their goal is to make similar technology available to users on the go, by investigating scenarios with common camera’s, a pico projector, and a mobile smartphone device.   The algorithms they have designed can scan 3D objects in real time, outputing a normal projection on any surface, may it be a coffee table, work desk, or wall.

A brief history on multitouch technology. It began in 1982 when the University of Toronto’s Input Research Group developed the first human-input multitouch system. With a frosted glass panel and a camera placed behind the glass, registering finger inputs on the glass surface became a reality.

Fast forward a few decades and we are at the start of the image touch revolution with fantastic devices being manufactured by companies such as the Light Touch and Virtual Keyboard.  These holographic technologies project an infrared image on any surface allowing users to interact with it. Microsoft who for all intents and purposes is always at the forefront of innovation, has given us access to video calls at the touch of our fingers.  They are also conducting research that allows 3 dimensional interactions with mobile phone devices and a camera-projector system allowing you to interact with everyday surfaces. With shades straight out of a Paramount set for Star Trek’s holodeck. A table, a sheet of paper and even your toilet roll can be transformed into an interactive screen.

Microsoft is also claiming that the kind of futuristic research they’re conducting will allow augmented reality in which a real world view is presented through computer imagery and 3D layered information presentations. If that’s not enough it will even support how to get a 3D object model in real time, therefore moving the projection of the contours of the object CAD model to the spatial intensity gradients in the image. That sounds like a mouthful doesn’t it? Well it is.

With the way technology is evolving, don’t be surprised to find a warp speed switch on your next car allowing you to transport inter-dimensionally.