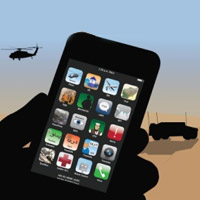 The military group named DARPA (Defense Advanced Research Projects Agency) based in the Pentagon have recently announced a Request For Information (RFI) seeking iPhone and Android applications, may they be commercial or non-commercial, and to be used specifically for  national security.

This request could just be to see who is out there and what they are doing, more of an intelligence operation if anything, as it states “This is an RFI issued solely for information gathering purposes” but that is custom for an RFP so highly unlikely.  They could also be looking at third-party developers to get ideas on what is being done with iPhone and Android in relation to modern day warfare.  The RFP states “DARPA’s objective is to identify apps suitable for widespread use by military personnel.  The potential install base is a hundred thousand to a million or more end-users.  Additionally, the DoD may require ownership and maintenance of required servers for the applications. ”

Use of the applications could be anywhere from military operations in tactical battlefield, humanitarian assistance, to disaster recovery efforts.  According to The Register, applications are out now that let snipers make ballistic calculations for taking out a target.  As sick as it sounds, it’s out there and people are making it.

The computing power of smartphones have grown to such a level that they are apparently up to military standards. Although DARPA and other similar agencies are usually ahead of the game, it seems that in this situation, HTC and Apple have run ahead.  If you recall back in 1999 when the US government banned 400-MHz to 500-MHz Power Mac G4s. “The Power Mac G4 is so fast that it is classified as a supercomputer by the U.S. government, and we are prohibited from exporting it to over 50 nations worldwide,” said Steve Jobs, Apple’s interim chief executive officer.