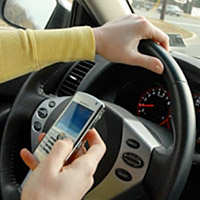 What is being labeled as an app for parents to protect teens from texting while driving, could be a candidate for government wide legislation and mandatory implementation by mobile carriers to keep the roads “safe”.

A study done by the  Virginia Tech Transportation Institute back in July 2009 showed that people who send text messages while driving are 23 times more likely to be in a crash.  Those are high numbers and were concluded after the examination of 6 million miles of road driven.

“Every young driver has a whole world of new things to concentrate on. Their phones are limited to emergency and parentally approved calls while driving, but unlimited when they are not. This reduces a primary cause of distractions and accidents for teens,” explained Brad White, CEO of Cell Cease.

The app is quite ingenious, it’s called Cell Cease and it works by prohibiting texting and calling when the internal GPS receiver of the cell phone detects a speed greater than 5mph.  There are allow lists, that of course allow calls from certain numbers at any given speed, calls filtered will go straight to voicemail. 911 calls are always on, a PIN allows the one in control to modify lists for calls.   The problem is, what if the teen just disables the internal GPS on their mobile, what will Cell Cease do then?

Currently only available for Windows Mobile smartphones with a built-in GPS.  The company is aiming their product at families (parents in particular) and businesses that would like to put “a ‘Governer’ on cell phone usage for your fleet drivers.”