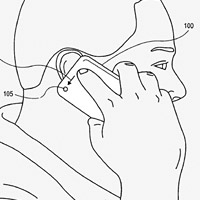 Apple, in its never ending quest to make their gadgets more James Bond like with each generation, has bought a patent involving motion sensing controls through a camera.  This would allow the user of an iPhone, iPad, or iPod Touch, more control over the device in a much more “touchy” way.  If applicable to the next generation of Apple products, it could be a major coup for Apple.

The patent, according to Patently Apple, will allow for almost total control of the iPhone through motion sensors in the devices camera.  By simply swiping or tapping your finger across the camera in a certain direction, you will be able to access voicemail, fast forwarding and rewinding voicemails, merge calls, and almost completely control the interface by using a distinct pre-configured motion.

Apple’s patent Figure 1 shows a front-side camera in use while the user is on a telephone call or checking voicemail. Another figure shows a user sliding his finger across the back-side camera, this could control the call or voicemail playback. The camera lens would not need to be actually touched, just the motion in front of it should give the command.  “Tap-detection,” is also another possiblitiy, tap on the phone with a finger to control various routines set out for the phone, like switch to call waiting, or perhaps to mute the call.

The new patent could really give it a leg up against the Droids, Nexuses, and ok, we’ll even include Windows Mobile.  Innovations such as this are classic Apple moves to stay ahead of the game in the smartphone wars.  Only time will tell however if this feature will make its way to the iPhone 4G, 5G or any iPhone at all.