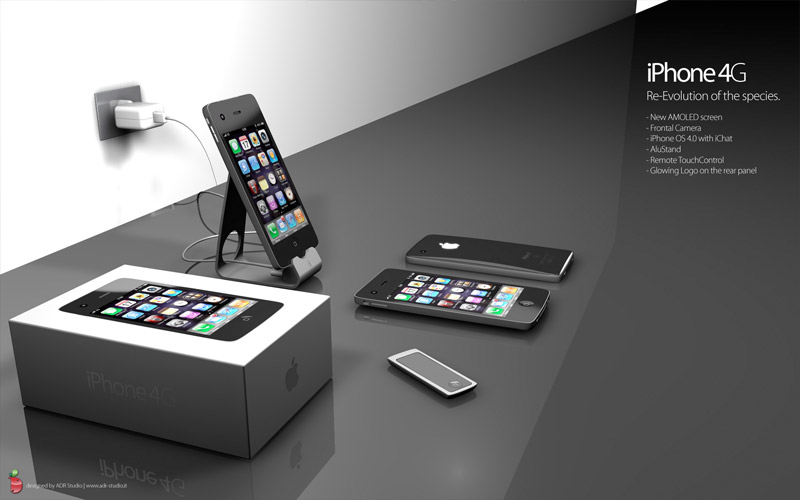 The Apple iPhone 4G is expected to cost significantly less than previous models.  Industry Analyst Katy Huberty, from Morgan Stanley believes 85% of the market is not willing to shell out the amount of money Apple want’s for their devices, therefore a price drop is in order for the next-generation smartphone.

“We expect Apple to launch new iPhones in June that offer both a lower total cost of ownership and new functionality, potentially including gesture-based technology,” she explained in a note to investors Friday.

Along with a price drop, the rumor tree blossoms specifications for the iPhone 4G consisting of WiFi N, a 5MP camera, an A4 chip clocked at 600MHz, perhaps faster, and AMOLED touchscreen from Samsung.

Here are new concept images just released from ADR Studio in Italy, courtesy of Antonio De Rosa.  He took readers comments into consideration from his previous set of concept designs.  He appreciates the criticism, and the praise,  and has taken the criticism and tried to improve the concept, with rounded shapes, ‘improving’ the ergonomics, and correcting some mistakes.

“My job is not to be “absolute”. I’m an Apple fan like the others, and I use my work to give shape to small dreams:) This is a tribute to an icon of technology that has radically changed the understanding of mobile communication.  That’s all folks. I’m imagining new gadgets, new scenarios for this remarkable device, which I hope to show you soon.”  said Antonio De Rosa.

Update Note: The name “iPhone 4G” is in reference to the iPhone’s 4th Generation design slated to be released this summer. In all reality it will not be named the iPhone 4G at launch, for more on this check the Clearing the air on iPhone terminology: 4th generation vs. “4G” over at TUAW.