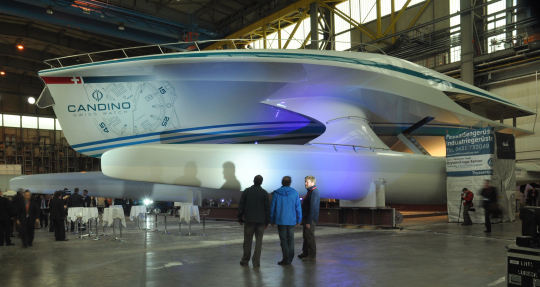 The World’s largest solar boat has just been unveiled by PlanetSolar in Kiel, Germany. The sunbathing catamaran marvel measures 100 feet long by 50 feet wide and is covered in 5,300 square feet of photovoltaic solar panels consisting of 38,000 next-generation cells by SunPower.

Being the largest solar powered boat on the ocean, it must have something to capture that technology, well it does. On-board PlanetSolar is the largest lithium ion battery in the world, made by HDW (Howaldtswerke-Deutsche Werft), and being tested for future use on non-nuclear submarines.

Raphael Domjan, skipper and CEO of PlanetSolar has been dreaming of touring the world in the most energy-efficient way using next to no power since the early 80s. He began his quest in 2004, which resulted in the PlanetSolar project launching in 2008, and now closer than ever to making a global round trip with a solar-powered multi-haul catamaran.

PlanetSolar is slated to set sail in late March and then begin a world tour in early 2011. The company claims it to be the fastest solar powered boat to cross the Atlantic Ocean and first to cross both the Pacific and Indian Oceans. The boat has cost $24 million to develop.