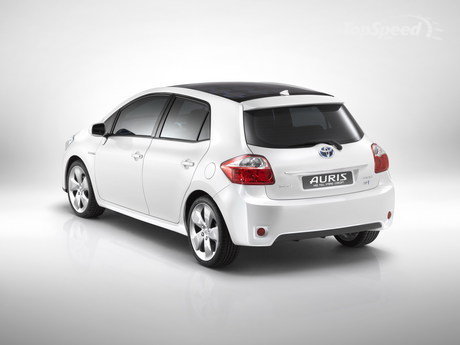 Toyota has been taking a beating in the media lately, but that still doesn’t change the huge success they’ve seen from their Prius Hybrid. On that same premise, Toyota has decided to expand the hybrid lineup by adding a compact hybrid hatchback, the hybrid version of the Auris 2010 to be unveiled at the Geneva motor show.

In order to keep the competition going, the new model will be priced much lower than the Prius and other models like Honda’s more affordable hybrid. Exterior changes are small, the Auris will have a new bumper with integrated fogs (on the TR and SR), new headlights, modifications to the bonnet and a new grill that is clearly part of the  Toyota family theme.

A 1.8-liter I-4 is part of the “Hybrid Synergy Drive” system, with an 80-hp electric motor and electrically variable transmission. The concept aims to increase gas mileage by using low rolling resistance tires, smoothing the underbody panels to reduce drag, and a lower ride height for stability, most should be seen through to the final product.

Sad news for North America, Toyota currently has no plans on bringing the Auris Hybrid to it, however they have promised to incorporate its hybrid system into its entire lineup over the next decade, that means a Corolla or Matrix hybrid is in the not-so-distant future.