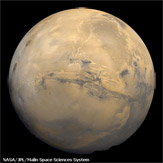 Barrack Obama has been a busy man, as we all know. He’s had to deal with a country in recession, sliding dollar value and an expensive war overseas.

With all this on his plate, he’s held his head high and accepted the Nobel Peace prize. And like any good politician, made grand promises he has absolutely no intentions of keeping.

But SuperBama has another conquest on his itinerary.

No, not a Chimp to mars, but astronauts first.  This has been clarified by NASA Administrator, Charles Bolden during a press conference, Tuesday, Feb. 2, 2010,  where he revealed that NASA has awarded $50 million to further the commercial sector’s capability to support and transport a crew to and from Earth.

The good news is NASA’s 2011 fiscal budget has been approved, which means half the battle won. After all no mission into space under NASA’s tutelage is without an astronomical budget.  A few aerospace companies are going to be getting their own type of “bailout.”

NASA is extremely positive about this plan, despite disappearing rovers on the planet’s surface and unmanned craft orbiting and crash landing on Martian territory. Bolden has Obama’s backing. What they don’t have is the Congress senators backing, people who are critical of the mars mission, because they feel the moon is a more realistic and logical option first.

But as far as the moon is concerned there is this “been there, done that” attitude from NASA. And now you know why the Constellation program has been shut down.  On the other hand NASA has agreed to assist commercial companies in the U.S. to build space vehicles (Taxis) to transport astronauts to the Space Station which is being backed by about 6 billion in green backs, which also means we won’t be seeing the Hilton or the Ritz in space anytime soon.

The good news is the budget supports robotic ships launched into deep space to find viable planets for astronauts to explore.

With the Constellation program being scrapped because it was going over budget,  this has hurt a few contractors such as Alliant Techsystems Inc and United Technologies Corp, which according to space shuttle engineer Michael Snyder is a large loss of time and experience.

NASA has the resources at the moment to fork up $50 million to companies for ideas on the astronaut space taxi service.  One wonders why it doesn’t have the resources to hire the right people for a project development cycle like the failed Constellation program – so that billions of tax dollars aren’t squandered without some constructive output.

But apparently the recession has no bearing on NASA.  Metaphorically speaking they do reside “In Space.”