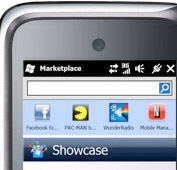 When Apple came forward with the App Store for the iPhone, everyone got pretty excited. At the same time apps had already existed on other platforms; just not in a unified storefront. The other trouble was that other smartphones did not have the same kind of internal storage capacity as the iPhone.

As a result, it has been more difficult to install quite as large a number of applications on other smartphones because of internal memory limitations. That’s about to change, at least for the Microsoft fans in the audience. Rather than restrict you to internal memory, you can now install some apps on a storage card.

Microsoft just made an announcement on the ability to install new applications from the Windows Marketplace for Mobile has been added to both Windows Mobile 6.5 and the upcoming Windows Phone 7 Series.

Since you can get these microSD memory cards in fairly sizable capacities, you could say that this brings Windows Mobile smartphones on par with the iPhone, at least in terms of installing a large number of apps.

For the record, Google Android phones are still lacking in this ability and rely solely on internal memory for app installations. I have a feeling that’s going to change pretty soon based on today’s news.