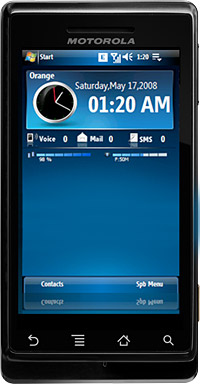 It’s no secret how Bill Gates views Google and its Android operating system. One fine afternoon Gates, while browsing the web discovered that Google was recruiting ex-Microsoft employees. That’s when the penny dropped – Google was competing with the ‘Big Boys’ in the OS market.

Building an operating system for handheld devices is a lucrative business. It is the story of David and Goliath all over again. Microsoft has been taking a sound beating in the mobile phone market.

Motorola’s CEO is business savvy. He is diversifying his product mix by introducing a brand of phones with Microsoft’s heavily touted Windows Phone 7. Essentially Motorola will have this new phone satisfying Motorola-loyal customer, with the ‘Motorola Droid’ targeting one segment of the market and the Windows 7 phone targeting another segment of the market. He’s got it covered.

The Windows 7 Phone series GUI architecture uses a “hub” thus slotting content in various categories. This may seem revolutionary and unique in contrast to Android but the truth is it’s a similar interface to Microsoft’s Media Player Zune project. It’s no big deal software companies recycle their code libraries and designs on older projects for newer projects all the time – it’s called ‘Software Recycling’. Rumour has it the Windows Phone 7 language is an amalgam of Silverlight, XNA and the .NET compact framework. Yes XNA the language used for writing code for X-Box games and Silverlight Microsoft’s alternative to Flash.

Microsoft CEO Steve Ballmer has reassured all concerned that Microsoft will continue to support Windows Mobile 6.5, although right now it looks like an ancient relic that Microsoft may want to drop like a hot potato.

Microsoft is also aware that Apple is another tough competitor with their I-Phone. Microsoft’s Marketing analysts want consumers to know that they are going to be offering a unique product different from Apple’s marketing strategy, to build media devices.

Looks like the software giant has its claws out and wants to put a stranglehold on the handheld device market reminiscent of the PC – Apple wars.