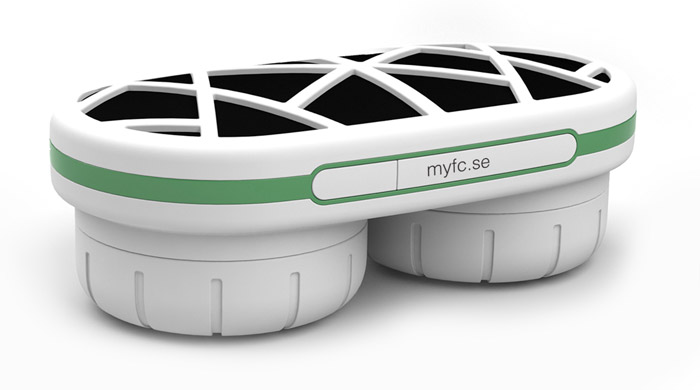 The Swedish company myFC AB unveiled a series of hydrogen powered portable fuel cell power generators designed to recharge your mobile device whether you are in the desert, jungle or any remote location lacking a power outlet.

How is energy created? Through the “Proton Exchange Membrane”, hydrogen is converted into electricity by drawing from a packet of aluminum powder added to one of the compartments in the device along with precious water.  The companies aim is targeted to developing countries like Africa. It may be naive to believe the people in poverished countries such as Africa need a hydrogen power pack that requires one of the most important things to them, water.  And no mention of the quality of water that is needed, is it distilled? Filtered? Plain? Because the water running straight from the tap in many remote villages have high iron content, will this conflict with the production of hydrogen? Then there is the Aluminum powder packet which according to the company will be “inexpensive” but it is still an expense nonetheless, another thing people in Africa do not have much of, money.

The company has 3 different designs.  The B2 series is for charging your smartphones and devices that require 6W of power.  The H3 with output being from sub-watt to 3W is for charging all your other portable electronic devices.  Both of the B2 and H3 series are designed to be durable enough for outdoor use.  The third design is called the Blade, at 3mm thick, it’s really just a prototype design for manufacturers to integrate on the back of devices which I could see having more potential than a stand-alone product.