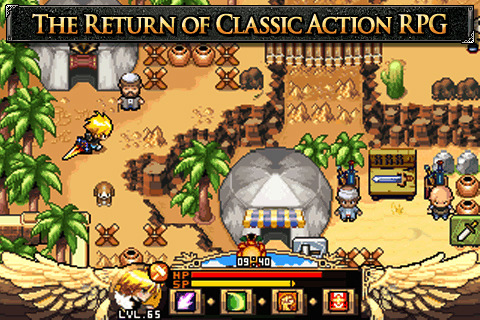 Zenonia, from Gamevil, is a very popular app for the iPhone and iPod Touch that is regarded as one of the best RPG games on the iPhone. It has won numerous awards since its release over a year ago and is still a highly downloaded app. However is this an app that lives up to its reputation, or is it a relic of the early days of apps?

Zenonia is an RPG which is one giant homage to classic console RPGs of the late 80’s and early 90’s. The plot is rather generic, playing as a special young man who’s destiny determines the fate of the world. The plot may be generic but it’s presented in a brilliant way. The text dialogue is incredibly humorous with numerous breakings of the fourth wall. It is vulgar in concept but all of the questionable words are censored.

The graphics of Zenonia are colorful and really creates a sense of nostalgia to the days of the SNES and Sega Genesis. The graphics are also not in 3D which is prone to shaving off a few hours on your iPhone’s battery life. Sounds are generic and nothing special and the main character’s grunts when attacking can be rather annoying.

The controls are simple. There is a D-Pad and an action button which powers the entire game. I would have liked the game to have been more touch controlled, but it didn’t take away from the brilliance.

As far as actual gameplay is concerned, Zenonia is incredibly fun if you are a Zelda fan. It is action based so there is no turn based combat which slows everything down. A class system, moral alignment, magic, and lots of items add depth to the game in a nod to the Final Fantasy series.

Zenonia in short, is a great game. It provides simple and addicting gameplay with a decent story and funny dialogue. It is currently on sale on iTunes for $3 and is well worth the download. It exceeds expectations and may be the best game on the iPhone. There is talk of a sequel in development so play the original now before the sequel comes out.