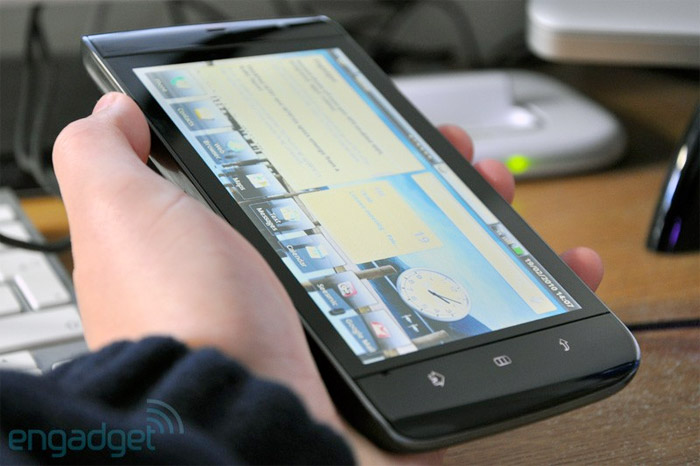 Even before the Apple iPad officially broke the surface, we had already seen a number of UMPCs and MIDs hit the market. You do have to admit that Cupertino will really help to put the mini-tablet on the map, though, so it’s interesting to look at the immediate competition. One of the most captivating? The Dell Mini 5.

The boys and girls at Dell are staying pretty mum about release date and pricing, but Richard Lai of Engadget was lucky enough to get his hands on a Dell Mini 5 prototype and his overall impressions are quite positive.

As you recall, the Dell Mini 5 gets powered by Google Android and takes on the appearance of a mobile Internet device (MID). If you really want to, you can even use it as a 3G phone… even if it’s a tight fit in your pocket.

Some of the most notable features include the five-inch 800×480 capacitive touchscreen display, Snapdragon (1GHz) chipset, Bluetooth, WiFi, GPS, WCDMA, 405 MB of RAM, 1.63 GB internal storage, and a microSD slot. It’s preinstalled with a huge slate of Android apps, but there is no social networking integration. They did preload Meebo IM though.

Video support isn’t the best, but the quality seems to be quite good. There is just a mono speaker on the back of the Mini 5, so you’ll want to use a good set of headphones instead. There’s also a 5MP camera in there with a good array of picture-taking options like self-timer, multi-shot, white balance, contrast, and more.

All in all, EnGadget sounds reasonably pleased with what the Dell Mini 5 has to offer. Their expecting some new firmware to address some quibbles, and would like to see a better camera and more storage too. Now we just have to learn the price.