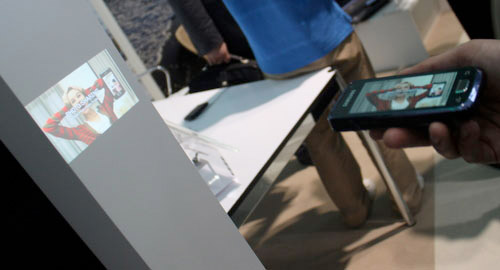 At Mobile World Congress this week, the latest innovations from the labs of Samsung were being shown about. One of those innovations were the latest projector phone called the Samsung Beam, or I8520 Halo, running Android 2.1 with the companies highly-sought after Super AmOLED display.

The Beam uses a third-generation of Texas Instruments pico-projector chipset giving off 10 lumens of brightness and an 800×600 projection, as opposed to 6 lumens and 320 x 480 of its predecessor.

With an 800 Mhz processor, the BEAM is able to stream smooth images and video over the customized projector UI. The Super AMOLED is said to be a 3.7-inch WVGA display, Samsung has removed a layer of coating from the traditional AMOLED to decrease reflectivity by 80 percent making the screen appear brighter, more vivid, clear and super.

The Samsung Beam is expected to be launched in Europe the second quarter of this year with select locations worldwide, no details on a North American launch or pricing was announced.