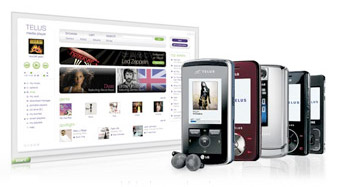 Telus today announced they are the first wireless carrier in Canada to offer “over-the-air DRM-free” music downloads. This comes as no surprise, music downloads traditionally from Telus would have been locked to your Telus phone, no other device or computer would be able to play the music until now.

DRM-free music allows Telus customers to transfer music they buy from the Telus Music Shop to any electronic device, smartphone, music phone, desktop or laptop computer. Anyone who purchased music previously that was not DRM-free, you will need to pay an extra $0.30 per track on top of what it originally costs, Telus calls it an “upgrade” to receive the DRM-free version. The purchase can only be made from the Telus media player or capable handset of course.