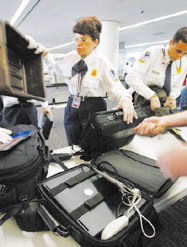 Travel laws for those with a laptop, smartphone or battery powered mobile device are once again about to get stickier, even shipments of said devices may get more expensive due to the U.S. Department of Transportation’s proposal regarding the transportation of small, battery powered devices by air.

Passengers traveling by air will be affected as the rules pertaining to extra lithium-ion batteries in your checked-in luggage will now affect alkaline and nickel metal-hydride batteries.  Any battery must be inside the device to be allowed in checked in luggage.  Extra batteries will be allowed in carry-on luggage.

There have always been exceptions on small lithium cells and batteries, which were stated to be less than 100 watts/hr, most laptop batteries carry 60-80 watts/hr. Small lithium batteries are in class 9 of hazardous material, it is a miscellaneous category including dry ice and magnetized goods.

The Pipeline and Hazardous Materials Safety Administration (PHMSA) and the Federal Aviation Administration (FAA) said that by not having the exceptions it is going to force vendors and transport companies to use better quality packaging.

“Under existing regulations, a flight crew may not be made aware of a pallet containing thousands of lithium batteries on board the aircraft, yet a five-pound package of flammable paint or dry ice would be subject to the full scope of the regulations,” said Minnesota Democratic representative and House Transportation and Infrastructure chairman, Jim Oberstar, in a statement. “That makes little sense.”

A complete copy of the Department of Transportation’s proposal can be found here.

George Kerchner, the executive director of Portable Rechargeable Battery Association in Washington D.C. has said “It will be a nightmare for passengers.”

Kerchner feels that we would be better off with stricter enforcement of the existing rules, not implementing new ones.  These changes could affect everything from button battery-powered hearing aids – tools – defibrillators and (brace yourself) your next shipment of iPads.

Kerchner said that if the U.S. creates stricter rules than the International Civil Aviation Organization, who is in charge of the rest of the world, it will be a huge financial hardship on manufacturers and shippers by changing/increasing the packaging, labels, and shipping details.  Not to mention the monstrous costs of all the workers here and overseas that will have to be “fully regulated hazmat” training.

“We’re talking about billions of dollars,” he also implied that any new costs would most  likely be passed on to the customers.

He did acknowledge the department’s data that there were 40 air transport related incidents since 1991 that did involve lithium batteries and devices that were powered by lithium batteries;  Kerchner stated that it is a small number compared to the 3.3 billion that were actually transported in 2008.