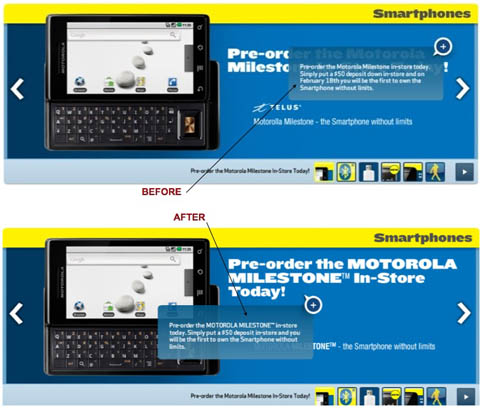 We had high hopes. While our wish for a January launch got dashed, we figured that the Motorola Milestone would hit the Telus lineup by mid-February. Now, it seems like the Android-touting smartphone has hit another delay. At least, that’s what a change on the Best Buy website is leading us to believe.

If you looked at the Best Buy website just a short while ago, you would have seen it mentioning a launch date for the Motorola Milestone of Febuary 18th. That’s the day that it was supposed to hit Telus. If you go to the Best Buy site now, you’ll see that any mention of February 18th has been removed. What does this mean?

You should always take these pre-order announcements on retail sites with a grain of salt, since the date was never formally announced by Telus, but this still leaves us wondering. Maybe Telus told Best Buy to remove that date for a reason.

Even though Best Buy has taken the date off its website, this does not necessitate that the Motorola Milestone will not launch with Telus on February 18th. Until we get a press release from Telus, we can’t say for sure.