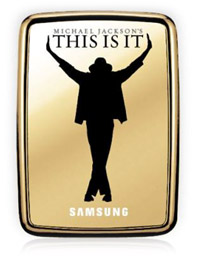 Samsung Electronics announced the availability of the special edition Samsung S2 Portable.  The S2 SE is a much improved external HDD with an increase of 500GB, and pre-loaded with ‘Michael Jackson’s THIS IS IT’ movie – coinciding with its February 22 release in Europe on DVD and Blu-ray Disc.

The Samsung S2 Portable also has USB On Board Technology and supports Auto Backup, Secret Zone, and SafetyKey, all user friendly Samsung software.

Samsung will announce any future plans to release the S2 Portable elsewhere after they see how the initial launch goes in Europe.