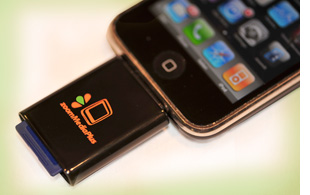 When Steve Jobs took the stage and formally revealed the Apple iPad to the world, one of the first things that left people scratching their heads was the lack of an SD card slot. Then, he showed us that there was an accessory that addressed this need. As it turns out, you can have an SD card reader on the iPhone too.

It’s not an official Apple peripheral, but it serves exactly the same purpose. What you see here is the ZoomIt SD card reader for the iPhone and iPod touch. To work alongside the ZoomIt app, the little accessory attaches to the dock connector in the bottom, letting you transfer all kinds of files to and from the iPhone or iPod touch.

Perhaps the most obvious use of this is for loading pictures and videos, but you could just as easily use the ZoomIt solution for music, PowerPoint, PDF, and other other kinds of files that the iPhone OS will support. The iPhone didn’t have expandable memory before and, well, this basically adds that function.

The ZoomIt should be available for sale in April, but you can pre-order the $50 device starting right now. I’m thinking that it might work with the iPad too, if you prefer a non-Apple alternative to the official accessory.