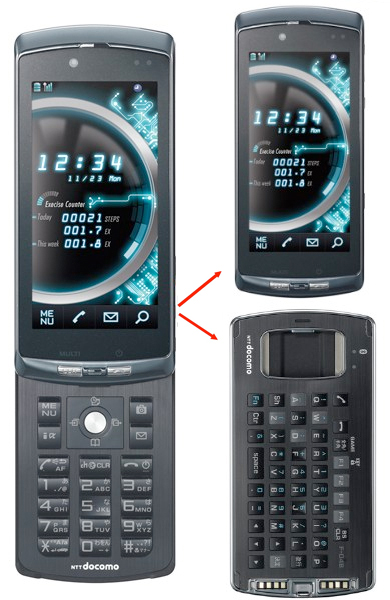 The cell phone industry in Japan is easily among the most innovative in the world, shoehorning crazy features like 12-megapixel cameras and dual digital TV tuners into their handsets. Going to another level is the newly revealed Fujitsu F-04B, the world’s first phone with a separable two-module body.

While it seems like it could have similar functionality as something like the LG Versa, this Separate Keitai from Fujitsu (keitai is the Japanese word for handset) is still quite unique in its approach.

One part of the phone takes on the 3.4-inch touchscreen display, as well as a 12.2-megapixel camera, a secondary camera, an accelerometer, Blu-ray recorder connection, and e-wallet functionality. The other part features either a full numeric keypad or QWERTY keyboard, as well as an accelerometer.

Instead of requiring a physical connection between the two, the two components of the Fujitsu F-04B actually link up with one another via Bluetooth and are “magnetically joined” so you don’t lose any of the pieces.

According to Fujitsu, you can hold the keyboard section to your ear and hold the display slate at arm’s length during video calls. You can also choose to keep the touchscreen portion close to a window for better signal strength while you walk to the other end of the room with the keyboard portion to chat.

Despite the constant requirement for Bluetooth, the phone is said to boast 2,000 hours of standby and 500 minutes of talk time. That’s triple what is normally expected of Japanese cell phones. Look for the Fujitsu F-04B to hit NTT DoCoMo in March or April for $660.