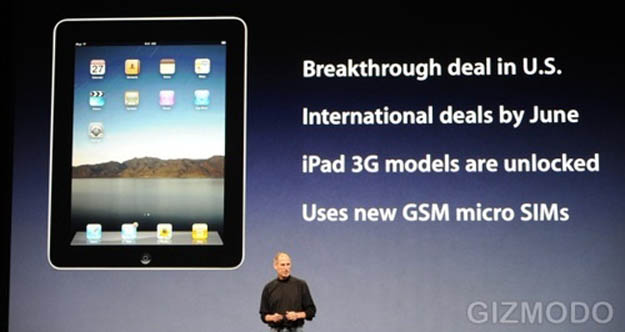 By now, you’ve surely heard about the Apple iPad and how it’s going to revolutionize the ebook and tablet worlds. What you may still be wondering about are those strange GSM micro SIMs that Steve Jobs mentioned during the announcement. What’s different with the micro SIM?

Up until El Jobso made the mention, very few people even knew that such a technology was in development, let alone the precise details. While the iPad is certainly large enough to take on a standard SIM card like the iPhone or any number of other smartphones, Apple went with the micro SIM instead.

Well, the micro SIM is the next-generation of SIM cards and it is referred to as the 3FF (third form factor) in some circles. Just as SD cards paved the way for miniSD and microSD cards, the same kind of thing is happening with SIM cards.

As you can see from the image provided, the actual “important” part of the SIM card remains the same size. That gold contact area is the same size as the SIM card you’re using now; you just lose that extra plastic that surrounds it. Also, the newer micro SIM cards will have more room for emails and it has a new authentication scheme to fight carrier spoofing.

Since the gold contact area appears to be same, it’s possible that might be able to cut away at your existing SIM card to make it fit in the iPad. Of course, that kind of modification is totally at your own risk.