Well Ontario drivers, your time is up.  It’s been three months since the law first took affect, October 26, 2009, and during that time there was a grace period where drivers would only receive a warning when using an electronic device. Not any more. 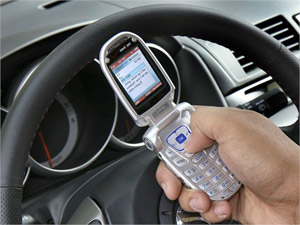 Now as of Monday, February 1st, 2010 all drivers caught texting, emailing, browsing or dialing any hand-held electronic device — including cellphones, MP3 players, laptops, DVD players, even GPS — will face fines of up to $500.  When will they ban drinking a bottle of water? 911 calls are the only exception.

Drivers who disobey the law will receive a set fine of $125 plus a victim surcharge (even if there isn’t a victim) and court fees that raises the ticket to $155. If the ticket does go to court the fine could reach as high as $500.  Police are allowed to use their own discretion and charge drivers with dangerous driving or careless driving if they see fit.

Ontario’s Ministry of Transportation states that a cellphone-using drivers are four times more likely to be involved in a collision.  Dialing and texting carries the highest degree of risk.

There are already 50+ countries that have similar laws in place in various states and provinces.  Quebec, Nova Scotia, Newfoundland and Labrador, California and New York already have their laws in affect.