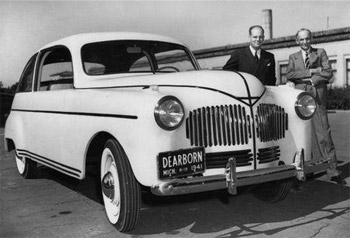 Henry Ford, famous for his interest in experimenting with hemp and soy-bean plastics would be thrilled to learn of the work Debbie Mielewski, at the Ford Research and Innovation Center in Dearborn, Mich., and her team of bio-engineers is conducting.

Mielewski’s Plastics Research Group is creating an earth-friendlier plastic and considering that the average car contains roughly 300 pounds of petroleum plastic, this is a good idea.

The Great Garbage Patch which was discovered in the Pacific Ocean last year, was a giant mass of plastic sludge about the size of Texas, revealed that we are at crisis-levels of environmental impact on our planet.

Ford Research and Innovation Center has been successful in other areas of creating recycling/environmentally friendly products for their vehicles.  Eight years of testing created the soy based foam that was capable of withstanding Ford’s durability tests and is now found in seat cushions and headrests of the 2010 Mustang.   This alone is preventing 5 million pounds of CO2 from being released into the earth’s atmosphere.

The Plastics Research lab has been experimenting with coconut and sugar cane for seat covers.  They have been able to create some very beautiful covers which were made entirely of corn, but they have yet to pass durability testing.  Other products they are working with at this time is rice hull and wheat straw, two by-products of harvesting what farmers throw out anyway.

“My dream is to have compostable plastics on vehicles. Instead of going to a landfill and sitting there for a thousand years,” says Mielewski. “In 60-90 days in a compost pile, the plastics will nourish the soil…and it can be used to grow plants.”