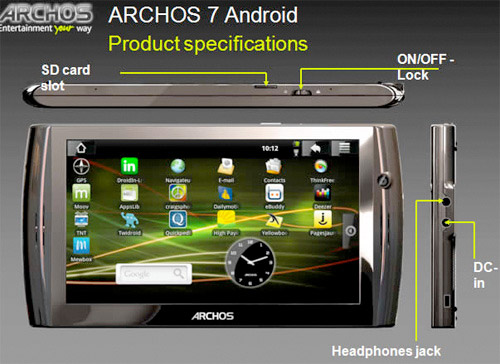 When we first heard of the Archos 7 two years back it sounded quite interesting, our impressions were that it was to be a PMP similar to the Archos 5, but times have changed and so has technology, and now Archos plans to ship it in March of this year as a Google Android tablet.

The Archos 7 sports a 7-inch LCD screen with a resolution of 800 x 480 pixels, 8GB onboard storage, expansion with an SD card slot, webcam and less than half an inch thick.

From devices I have come across, Archos always seemed to have been lacking in the software department. Sure it had Archos Media Center, which we don’t know if it will stick around for this release. But it’s great to see the company move in to something like Android, compatibility will be enormous, applications and games will become available, it will just become a more interesting and supported product that won’t disappear in to the ether.