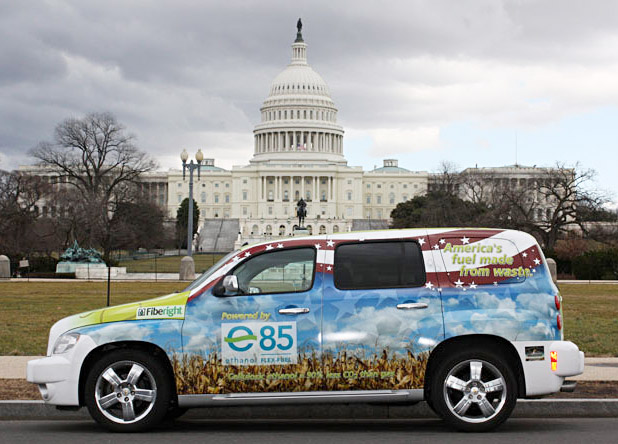 To be featured during the Washington Auto Show is a special flex-fuel Chevrolet HHR. This will be at the Washington Convention Center and there will be an opportunity for government VIPs and members of the press to test drive the car today at the Ride ‘n Drive event. A similar flex-fuel Ford F150 is there too.

It’s not like shredded government documents and random cardboard boxes are the only source of fuel for these cars. They both run on E85, so that takes a blend of 85 percent biofuel and 15 percent gasoline.

Whereas the ethanol biofuels of the past have made use of corn and other crops, Novozymes has developed an “enzyme cocktail” that can make advanced biofuel “from agricultural residues, municipal waste and energy crops.” The paper waste is converted into sugar and then fermented into biofuel following a sequence of pulping, pre-treatment, and wash.

“The advanced biofuels showcased here today demonstrate that the enzyme technology is ready for market. What we need now is commercialization and deployment of advanced biofuels in order to help meet our country’s most pressing energy and environment challenges,” said Adam Monroe, president, Novozymes North America.

Advanced biofuels are said to have 90 percent less CO2 emissions when compared to gasoline and are among one of the most cost-efficient ways of reducing CO2 in the transportation sector. Novozymes’ technologies in 2009 reduced CO2 emissions of approximately 27 million tons – similar to taking 7 million cars off the road.