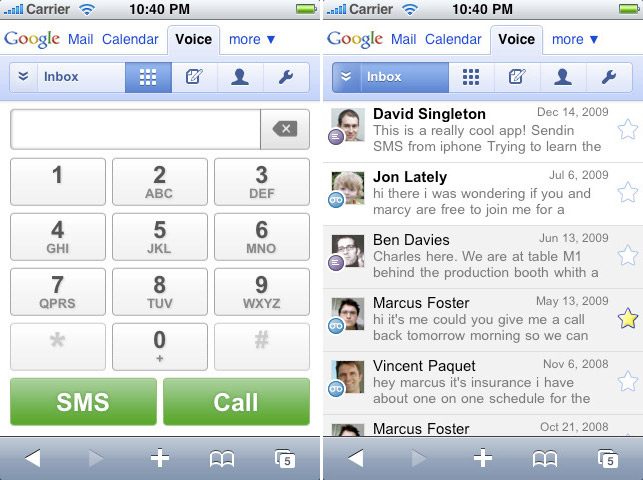 Google Voice mobile web app for iPhone OS 3.0+ and Palm Web OS was launched today, regardless of Apple’s efforts to keep the phone and SMS software off their device.

Apple kicked Google’s software off the iTunes app store about 6 months ago, and with the iPhone being exclusive to AT&T in the USA, an application like Google Voice mobile could cut your cellphone bills down drastically just by adding your Google Voice number. If AT&T retaliates and tries to block Google Voice mobile, then they will just look like the bad guys.

So what Google did this time around was made it in to a Web App. Making calls from the Web app displays your Google Voice number as the outbound caller ID nubmer, so any calls coming back to you will be to that number. They even added text messaging for free and international calling through Google Voice’s much lower rates.

Visit m.google.com/voice in your mobile browser to get started. You’ll need a Google Voice account and a voice plan on your cell phone to place calls using the web app. If you don’t have a Google Voice account you can simply, request an invite. Google has been fairly quick lately and has sent out requests within 24 hours. Google Voice is currently only for the US.