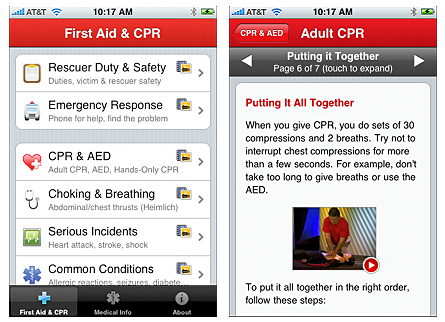 Dan Woolley said Tuesday on The Today Show that he was in Haiti filming a documentary on the efforts to help the poverty-stricken children of the nation.  Woolley was at the Hotel Montana in Port-au-Prince when the 7.0 earthquake hit and the hotel collapsed around him.

Woolley is crediting his iPhone medical app, Pocket First Aid & CPR, for saving his life.  He used the light on his iPhone to examine his injuries.  Using the medical app on his iPhone, he was able to diagnose a broken foot and follow the instruction to treat himself.  He used his shirt to treat the excessive bleeding from the 3-inch cut on his leg and a sock to one on the back of his head.  He was also able to look up ways to prevent himself from going into shock.

“I kind of had some time to do some self-diagnosis down there,” Woolley said. “God was with me.”

Thanks to the iPhone app Woolley was able to return to Colorado Wednesday after spending time recovering at a Hospital in Miami.