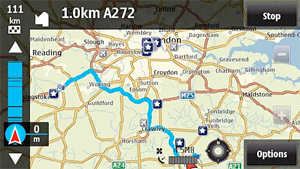 Ovi Maps is a mapping service from Nokia which includes turn-by-turn voice guidance for driving and walking navigation, and its free.

Nokia wishes to increase popularity of navigation and location-aware services on its mobile phones, the release of the Ovi Maps service is in direct response to Google Maps Navigation for their Android OS, which Google released in October of last year. It offers Google Maps, Street View, turn-by-turn voice navigation and voice searching.

The free software is going to cut a small portion of Nokia’s revenue, but in the long run they may just save themselves from people migrating to the iPhone or Android devices to reap the benefits of their free navigation software.

The latest version of Ovi Maps features both automobile and pedestrian navigation features, turn-by-turn voice guidance for 74 countries in 46 languages, with traffic information for another 10 countries and detailed maps for 180 countries Nokia said.

Support devices include the Nokia N97 mini, 5800, XpressMusic and E72. It’s a free download from Nokia’s software website, in March new phones will come preinstalled with the Ovi Maps Softare.