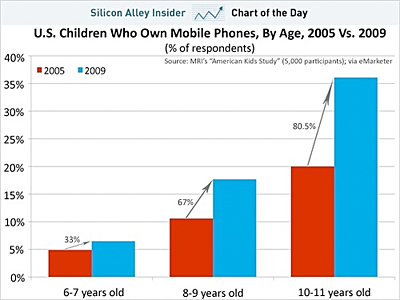 These days almost everyone has a mobile phone or some other type of wireless device. A study by MRI shows that twenty percent of American children ages 6-11 currently own a cell phone, up from 11.9% in 2005. The most shocking increase has been among 10-11 year olds (+80.5%).

The study was done on a group of 5000 participants, and talked about the feature-rich, kid friendly phones like Disney Mobile’s LG Phone and the FlyPhone. Some more information is discussed on how boys and girls use their phones differently. While girls make more calls and send text messages, boys are more interested in instant messaging, downloads, games, music and videos.

It’s interesting that the MRI study did not mention any health concerns, it was more focused on what the different child groups were interested in for what seemed to be a market summary for businesses. We are talking about a large population of developing children being subject to electromagnetic fields and radio frequency radiation, but I guess big business tends to avoid these issues.

A study released just last January showed mobile phone use before the age of 20 will increase chances of malignant brain tumors by five times. The international group of scientists studied these effects at two university hospitals in Sweden, they concluded that current standards for exposure to microwaves during mobile phone use is not safe for long-term exposure and needs to be revised.

It is also known (PDF: Summary Findings ) that calls lasting a mere two minutes can open the blood-brain barrier in children, as well as adults. This allows toxins in the bloodstream to cross the blood vessel gateway into the skull and attack brain cells. The same two-minutes of cell phone exposure can also disrupt the natural electrical activity of a child’s brain for up to an hour after. Now get to school kids and try to learn.