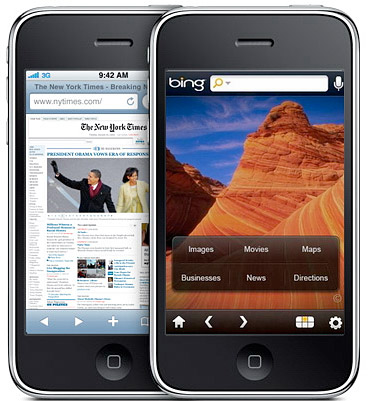 An increasing rivalry between Apple and Google is developing. With the launch of the Nexus One phone, a situation has arisen where search giant Google may be ditched as an engine of choice for the iPhone.

The word on the BusinessWeek street is that Apple is in discussion with Microsoft to bring the Bing to iPhone as its default search engine. If this has all been initiated due to Google’s latest smartphone and the Android OS, well, Apple may run in to problems yet again when the Zune phone comes to market. Any way you put it Apple will be dealing with a competitor, whether it is Google and the Android, or Microsoft with the Zune phone, there seems to be no way around it.

When the iPhone was first launched in 2007, negotiations led to things beyond just the Google search. Google Maps and YouTube were custom tailored to run faster on the Apple phone, this was successful and is among some of the most widely used applications on the device. If Apple burns the bridges with Google, these two popular features of the iPhone may not be as optimized or readily usable.