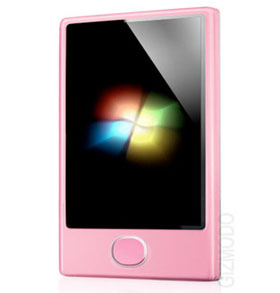 This is one of those stories that we have been following for far too long. What’s going to happen with this whole Zune Phone business? Is Microsoft finally going to enter the hardware arena with a mobile phone of itself? If the latest rumors are to be believed, the answer is a resounding yes, and the timeline may be shorter than you expected.

We already thought that the Microsoft Zune Phone would launch in 2009, but that didn’t happen. We also heard that Project Pink, as it came to be known, could combine a Zune with an Xbox to make an ultimate handheld. That hasn’t come to pass just yet either.

Well, the newest rumors are coming from Katherine Egbert, an analyst from Jeffries. She says that “Microsoft will be debuting its own phone sometime in the next two months… We expect the new phone to debut soon, at either the Feb 15-18 Mobile World Congress conference in Barcelona Spain, or possibly at CTIA in Las Vegas one month later.”

The exact details regarding the hardware itself are still quite sketchy, but the Zune Phone could come from a relationship similar to the one that brought us the Nexus One. As you know HTC and Google partnered up on that, but there is no HTC branding on the Nexus One. For specs, Egbert expects a 5-megapixel camera and 720p video support.

Personally, I’d be more interested in an Xbox Phone than a Zune Phone. Maybe this Project Pink business will deliver both, giving us some kind of hybrid that involves Windows Mobile too.