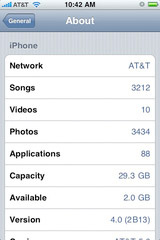 Some details about the iPhone OS 4.0 have fallen from the Apple tree. Hopefully no one will get bruised with the release of this information, as it is possibly scheduled to be announced next week with the mystical Apple iTablet.

These are some of features slated for iPhone OS 4.0 according to Boy Genius:

• Multi-touch gestures will be OS-wide.

• Multitasking support for running applications in the background.

• Graphical and UI changes to make navigating through the OS easier and more efficient.

• The update could be available for only the iPhone 3G and 3GS, but will “put them ahead in the smartphone market because it will make them more like full-fledged computers” more than any other phone to date. Everyone is “really excited.”

• This piece of information isn’t entirely clear, but there will be some new sync capabilities for contacts and calendar applications.