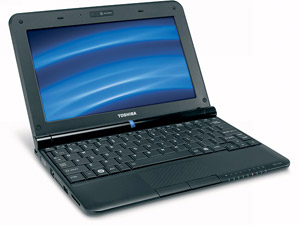 Toshiba has come out with the NB305, an upgrade to its predecessor the NB205. Still with an oversized touchpad and buttons, a metal keyboard, textured lid with matte finish, and a little power button that glows.

The most aesthetically pleasing upgrade on the NB305 is the battery placement.  The NB205 battery jutted out from the rear, on the NB305 it’s neatly tucked underneath. Toshiba has designed it to be more ergonomic, it tapers from 1.4 inches in the rear to approximately 0.5 inches in front. Although the slant is about an inch the angle is so slight is feels nonexistent.  Its weight remains the same at a light 2.6 pounds.

The Toshiba NB305 carries a 1.66-GHz Intel Atom N450 CPU, Windows 7 OS Starter Edition, 1GB RAM/Expandable to 2GB,  250GB Harddrive, 10.1” screen with 1024 x 600 resolution and good viewing angles, Intel GMA 3150 graphics GPU works well when playing back standard-def videos, but won’t feed your high-def diet, there are three USBs, VGA, Ethernet, an SD card reader, a mic and headphone jacks, louder speakers, the volume controls are located on the number keys and there is a display that appears on the screen when you adjust them.  The battery life is estimated at 8.5 hours. The touchpad is large, features left and right mouse buttons, replacing the cramped rocker, the multitouch pad response is very sensitive.  The system does appear to be rounder than the previous models and the front edge is more beveled.

The Toshiba NB305 is for sale with a $399 price tag, comes in blue, brown or white. (Pink didn’t do so well on previous models.) 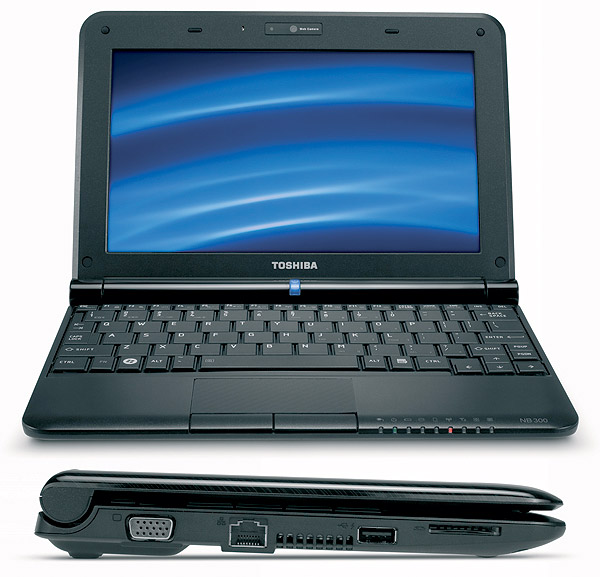